From our friends at Fossil Free Culture in the Netherlands:

'Last night was 25 years since 9 Nigerian activists were hanged for activism against Shell. Our hearts are with their families & communities. Last night we commemorated their deaths at Shell sponsored NEMO Science Museum in Amsterdam. 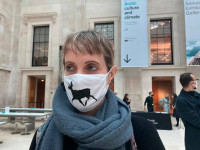 More from our good friends at BP or not BP?:

'Today we held a protest at the British Museum, in solidarity with Indigenous Arctic communities whose sacred lands are under immediate threat from oil drilling.

The protest was part of a day of action led by Indigenous groups Native Movement and Defend the Sacred AK in Alaska, against the Trump administration’s push to open up the

Taken from: https://www.rhinegold.co.uk/classical_music/amsterdams-concertgebouw-dr… 11th September 2020 'All cultural institutions on Amsterdam’s Museumplein – including the Van Gogh Museum, Rijksmuseum and the Royal Concertgebouw – have cut ties with fossil fuel companies. The move was