250 artists, performers and campaigners take over British Museum in 'festival of protest' against BP sponsorship

Today, Art Not Oil was joined by hundreds of artists, campaigners and performers in our biggest protest yet against BP sponsorship of arts and culture. At the iconic British Museum, members of fifteen different groups held multiple creative actions and performances throughout the museum’s galleries, including pop-up theatre, live music, a powerful spoken word performance by a group of children, a Quaker Meeting for Worship, a bagpiper smeared with oil – and much more besides. It culminated in a mass piece of “flashmob theatre” in the museum’s Great Court, with the gathered performers spelling out the word ‘NO’ – to a new BP sponsorship deal – in huge letters, while carrying black umbrellas. You can read here how all the performances unfolded over the day.

There were also protest performances that took place in the Tate Britain, the National Portrait Gallery and the Royal Opera House. All four institutions are sponsored by BP and due to decide whether to renew their 5-year sponsorship deals with the oil giant over the next few months. We know that BP is driving runaway climate change, lobbying against low-carbon alternatives, and destroying ecosystems and livelihoods around the world. The British Museum and the others should not be legitimising this criminal company by allowing it to sponsor their exhibitions.

aurel (13), who is part of “Children Against Global Warming”, performed as part of a poignant spoken word piece with two of her friends, speaking about their concerns for their futures. They performed both at the National Portrait Gallery and beside the Parthenon Marbles in the British Museum. She told us:

“I worry about the future and the impact climate change will have on my generation. BP want children like me who visit museums and art galleries to think they are responsible and care about our future. But I’ve seen the pictures of their oil spill and the Arctic melting and I know this isn’t true. I want to grow up in a world with a safe climate and without fossil fuels.”

Many of the performances recalled BP’s Gulf of Mexico spill in 2010 and how the consequences of the spill continue today. Cherri Foytlin, a Gulf Coast resident affected by the BP Deepwater Horizon spill, said:

“There is no art without life. BP has destroyed life here on the US Gulf Coast – both human and ecological. How would the museum feel if the most prized artefacts in its collection were smeared with oil, or if the people coming to visit were made sick? BP did that here. They are vandals of our beautiful world, and corporate serial-killers of life. It is our sincerest hope that one day these museums will value creation as much as a painting of creation, and expel BP from their donor list.”

BP was found to be “grossly negligent” in causing the Deepwater Horizon disaster and was recently fined $18.7 billion over the Gulf of Mexico spill, the largest environmental fine in history. Freedom of Information requests made by Art Not Oil’s members have revealed that BP provides just 0.8% of the British Museum’s annual income [3], and less than half a percent of the Tate’s.

Miranda Shaw, a campaigner with the Art Not Oil Coalition and member of BP or not BP?, said:

“This was our most ambitious intervention to date, and showed just how large the movement against oil sponsorship has become. As the British Museum, the Tate and others start debating whether to renew their five-year BP sponsorship deal our message to #dropBP could not be clearer. With so many other institutions cutting their ties to fossil fuels, museums and galleries must end their relationship with big oil or end up on the wrong side of history.”

The groups that took part in Sunday’s festival at the British Museum (in order of performance) were:

This was the latest in a recent series of high-profile actions by the Art Not Oil coalition. They have included exposing Shell’s influence over the Science Museum’s climate exhibition; a double protest by BP or not BP? at the BP-sponsored Royal Opera House backed up by a critical letter in the Guardiansigned by seventy-five composers, musicians and musicologists; ‘Time Piece’, Liberate Tate’s spectacular artistic 25-hour occupation of Tate Modern; and BP or not BP?’s performance protest against BP funding of the Edinburgh International Festival. Public figures including the acclaimed actors, Simon McBurney and Mark Rylance, and the playwrights Mark Ravenhill and Caryl Churchill, have regularly spoken out against BP sponsorship of the arts. 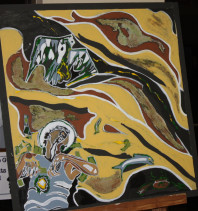