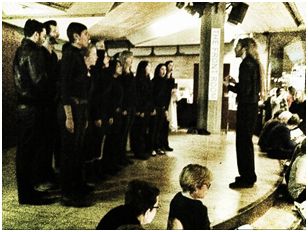 Shell Out Sounds (SOS) is a group of singers, musicians and activists who see Shell’s sponsorship of the Southbank Centre - one of the UK’s major cultural institutions - as entirely unacceptable. Our chief concerns are runaway climate change, Canadian tar sands exploitation, fracking and Arctic drilling, (though that list could easily be much longer). We make music in solidarity with communities impacted by Shell’s operations all over the world, who are themselves resisting this madness. 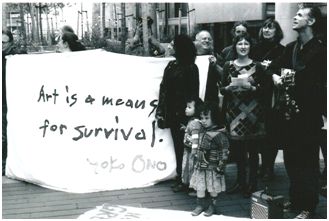 Partly inspired by Art Not Oil, Rising Tide, Liberate Tate, the Reclaim Shakespeare Company and Yoko Ono’s work in New York with Artists Against Fracking, SOS performances fuse indignation with celebration, and further blur the boundary between performance and protest. We use melody, harmony, poetry and rhythm to move hearts and expose Shell’s greenwash, ringing out the end of the oil age and ringing in an age of justice. 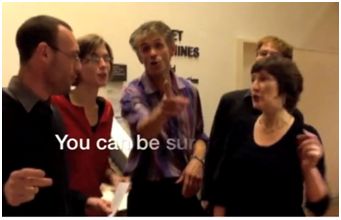 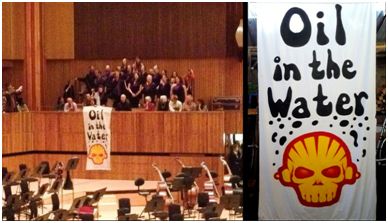 ​Shell Out Sounds was been a respectful but nonetheless uninvited guest during the South Bank’s 2013 Shell Classic International season. In October 2013, we performed in the Royal Festival Hall auditorium minutes before a concert in featuring ‘O King’, a musical tribute to Martin Luther King by composer Luciano Berio, for which we rewrote the spiritual (and civil rights anthem), ‘Wade in the Water’, rechristening it ‘Oil in the Water’, (thanks for the banner, Stig!) Having been prepared for heckles and boos, we were surprised and delighted when the audience applauded, with several even clapping along enthusiastically, (bad news for those who would like to claim that opposition to oil sponsorship is an extremist position.)

In 2014, we learned that future Southbank concerts would not be sponsored by Shell. The 'Shell Classics' season was over; this campaign, at least, had been won.

However, there are still many institutions sponsored by oil companies, and many songs still to be sung. We would love to hear from singers and musicians – amateur, professional or undecided – who might want to participate in future compositions and performances.

Oil in the Water' at the South Bank from Danny Nemu on Vimeo.